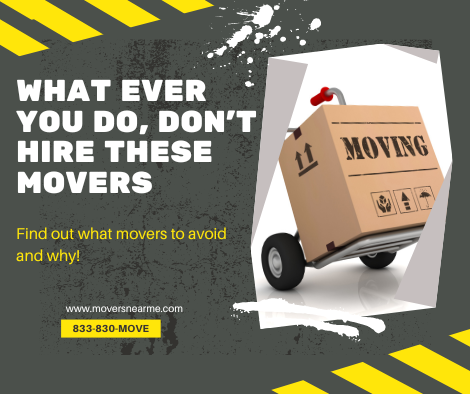 As peak moving season is winding down, consumers planning their upcoming out of state moves will be able to hire the best long distance movers in 2022 with a little more ease. This was not the case for many in the past few years. The pandemic caused a lot of rogue moving companies to pop up – inexperienced and fly-by-night scams are on the rise. Of course another new trend of one moving company owning multiple locations and “brands” to cut out any competitors is also something we have seen in 2022.

Take Boston, MA for instance. The market saw over 20 moving companies associated with Elromco/Boston Best Rate/Michaels Movers. The have over 20 brands all owned by out of country owners. Their terms and conditions for all of these brands states it is illegal to write a poor review and you cannot sue them. We spoke with an anonymous mover who used Anton’s Movers aka. Xpress Movers – one of the many “brands” all owned by Eli Derei, Stoil Andreev, Ronan Dhory. “Getting in touch with the owner to make a complaint after the move was impossible, its a goose chase to someone in another country.” He then received a letter from an attorney stating he take down his poor review or he will be sued. A quick web search finds all of their brands have impeccable reputations on the internet – a little too good do be true for moving company owners that have had to shut down several times under the name Boston Quality Movers. What’s more? Eliran Derei has ownership in these moving companies and owns Elromco – moving company software that gives him and his team every contact, email, access to every move coming in from movers that sign up for elromco.

In Florida, large moving companies flood the market with google ads and basically take every move. They do an abhorrent job then when the claims pile up, their business simply disappears only to rebrand and reopen somewhere else. This is the case with Good Greek. Good Greek has rebranded several times after claims get too much to bear. Another moving company that has constantly rebranded and reopened under new management several times – All My Sons. There is an entire facebook group dedicated to All My Sons Moving which is one of the largest moving companies in the country, yet their individual city reviews remain stellar. Something has to be done to fix the moving industry – how can the average consumer trust movers that are able to manipulate the internet to look like valid, trusted movers?

So, the question is- Which Movers Can You Trust

Choosing a moving company that has been around for a long time in your area – one that has not had to rebrand. Also, you can do a local search on your state corporation site to find out who the owner is. Look for red flags – owners who live in another country, owners with more than 2 businesses. Another red flag is which movers received PPP. Out of every industry moving is one that never experienced a slow-down and were considered essential workers. Most moving companies had their best years during the pandemic. If your moving company took PPP money, it’s highly likely they are shady. You can check who received ppp here.

Moving Reviews have been completely fabricated in the past 2 years. You can easily pay a company $5/moving review that companies are able to write themselves. These same companies can have fake reviews written and good ones flagged for review which means after so many flags google takes them down. You can not trust google reviews at all. They are not accurate. Yelp and BBB are paid. So, who can you trust? Movers Near Me has a platform that is filtering out fake/duplicate moving companies. This platform also verifies insurance and has a real intimate knowledge of the moving companies they put on their site. You can also visit Move Line. This is a startup that verifies moving companies and helps small, independent movers compete with larger companies so consumers can get the best moving services at lower rates.

Moving Costs are also an area of concern when finding movers you can trust. Prices can range by as much as 40% between moving companies. How can you tel which company is giving an accurate quote vs. low-balling only to upcharge you at a later time? You can start here using our instant moving calculator to give you an estimate of about where your moving company pricing should be around.

Moving Companies Near Me – Moving Help